The United Arab Emirates (UAE) is looking to adopt cryptocurrency in a ‘major role’ in its trading policies, according to a report by Bloomberg.

Speaking with Bloomberg Television in Davos, Switzerland – where the World Economic Forum is currently being held – UAE’s minister of state for foreign trade, Thani Al-Zeyoudi, made some positive statements on the potential role of cryptocurrency in the economy of the gulf nation.

“Crypto will play a major role for UAE trade going forward,” said Al-Zeyoudi. For years now, the UAE government has been working on transforming the nation into a global crypto hub, mainly by implementing crypto-friendly policies with the goal of attracting the big guns in the $1 trillion industry.

Al-Zeyoudi discussed this project with Bloomberg stating UAE’s plan of a collaborative effort with these companies in creating the required legal framework for the expansion of cryptocurrency operations within the Middle Eastern state.

“The most important thing is that we ensure global governance when it comes to cryptocurrencies and crypto companies,” he said.

“We started attracting some of the companies to the country with the aim that we’ll build together the right governance and legal system, which are needed,” he told Bloomberg in his interview on Friday.

Just a day before Al-Zeyoudi’s interview, the UAE’s minister for Artificial Intelligence, Digital Economy, and Remote Work Application Omar Sultan Al Olama, who is also representing the Emirates at the World Economic Forum, stated that the nation remained committed to its goal of becoming the world’s cryptocurrency hub regardless of the recent market crash.

While participating as a speaker in a panel discussion titled “Finding The Right Balance For Crypto,” Sultan Al Olama made these claims while saying that crypto companies already referring to the UAE as home was a positive thing to note.

Last November, the crypto market recorded heavy losses following the shocking collapse of the FTX exchange. Although the market is still far from a full recovery, there have been steady gains in the last few weeks.

For example, Bitcoin, the crypto market leader and the world’s biggest digital asset, has recorded an increase of 37.40% in its value since the beginning of 2023. According to data from CoinMarketCap, BTC is trading at $22,621.05 per unit with a market cap of $435.9 billion. 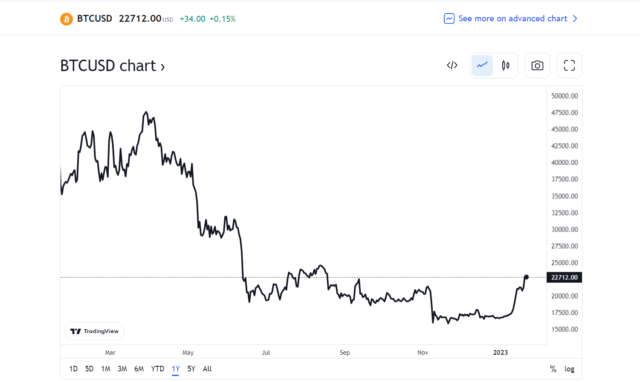 Could UAE Become The Crypto Capital Of The World?

At multiple times in the last few years, the Middle Eastern nation has stated its desire to become the global central hub for cryptocurrency operations. To this end, the nation’s government has continuously introduced several policies aimed at encouraging the activities of blockchain-based businesses in the country.

So far, these efforts have been a massive success, with over 400 active crypto businesses currently operating in the UAE. Furthermore, due to a friendly regulatory framework, several exchanges, including Binance, OKX, BitOasis, etc., have all acquired licenses to operate in the country.

Clearly, the United Arab Emirates is on the right trajectory to achieve its lofty goal. Although the nation still faces several challenges, including the constant risk of fraud and growing competition from other nations with similar goals, (e.g., Bahrain, Qatar, Egypt, etc.), the UAE is currently the leading contender to become the crypto capital of the world.