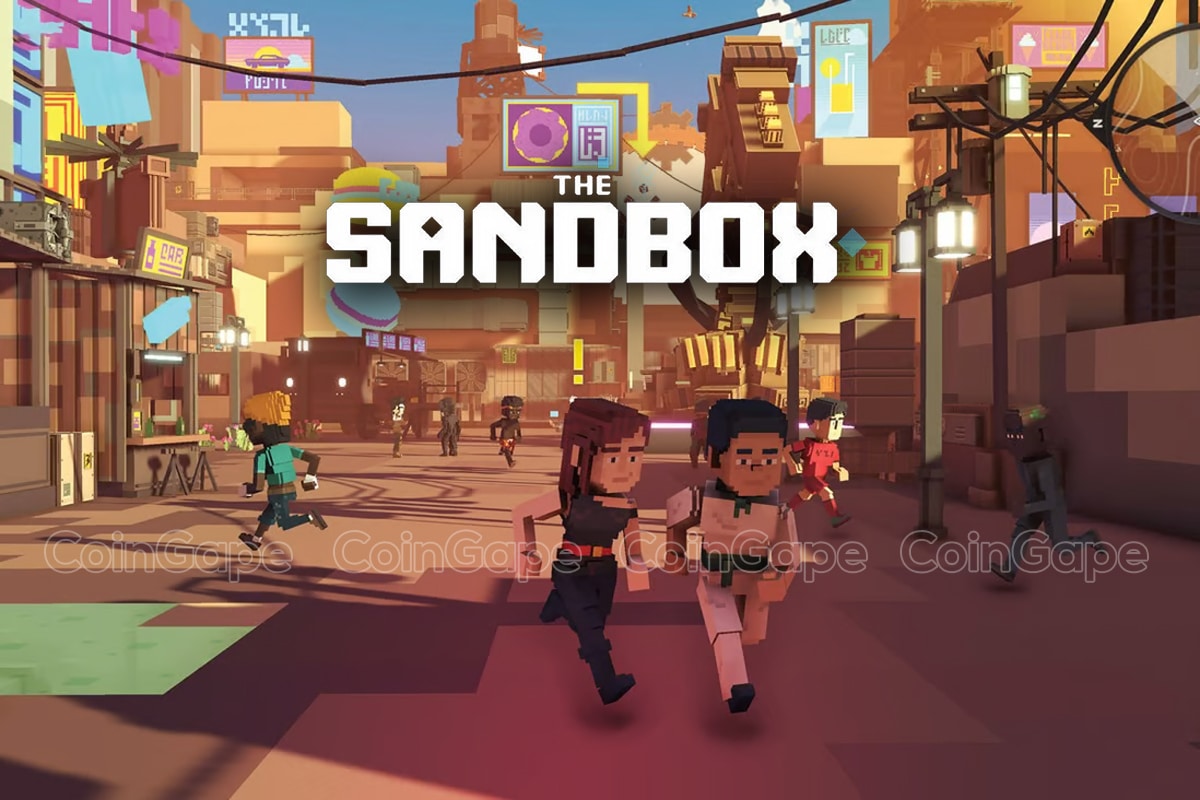 What is The Sandbox?

Sandbox is a play-to-earn game built on Ethereum. Additionally, Sandbox integrates blockchain, Defi, and NFTs in a 3D metaverse. Blockchain has become widely accepted in the gaming industry thanks to this game. It offers features like true ownership, digital scarcity, monetization, and interoperability between games.

The Sandbox is made up of three products:

Virtual lands are represented by the token “Land” in the metaverse game. In this virtual world, players can create and customize games. Using free design tools, they can also alter other digital assets. Additionally, players can create, own, and profit from their gaming experiences. Built on LAND, these experiences are transformed into non-fungible tokens (NFTs).

These NFTs can be exchanged for SAND tokens and sold on the Sandbox Marketplace. Additionally, players can incorporate these experiences into the game using the Sandbox Game Maker. Creators and users make up the metaverse economy of Sandbox. The economy is entirely owned by these participants.

Brief History of the Sandbox

Sandbox’s first iteration was released as a mobile game in 2012. It was a collaborative effort by Pixowl and game developer Onimatrix. Pixowl and the game creator Onimatrix worked together on it. Arthur Madrid and Sébastian Borget served as the Pixowl team’s leaders. More than 40 million people downloaded the game for mobile devices.

Pixowl was purchased by game developer Animoca in 2018. The goal of Animoca was to use blockchain technology to create a 3D world. They aimed to give users the ability to create, own, and profit from their experiences. To reward users, Animoca intended to use user-generated content and token economics.

How Does Sandbox Work?

To track who owns the virtual LAND and NFT ASSETS on its application, the Sandbox software makes use of the Ethereum blockchain. The users’ SAND tokens are stored in Ethereum wallets, which they use to interact further with the ecosystem.

The Sandbox gaming environment is run by the following five different types of tokens:

The ERC 20 tokens SAND, GEM, and CATALYST are the same. While LAND and ASSETS are, respectively, ERC-1155 and ERC-721 tokens.

It prohibits entry without the owners’ consent in each case. Additionally, Sandbox makes use of a conventional backend that is supported by Amazon Web Services (AWS). It serves as the backbone for its web front. Before minting their artwork, artists store it in an S3 bucket. These buckets are visible to users. However, Sandbox ensures that an artist’s work is kept private. It aims to stop letting people view the artwork before it is produced. An asset is stored on IPFS once it has been created so that it can be traded publicly.

How to create Sandbox Avatar?

Players can also design and personalize their avatars in the sandbox to interact with the metaverse. The outfits, accessories, weapons, hairstyles, and colors that players can choose for their avatars are numerous. The Voxel Editor can be utilized for this. Sandbox, however, has unveiled a brand-new avatar tool that enables customization without the editor.

What is The Sandbox Marketplace?

Creators and players can buy and sell digital assets in the form of NFTs on the Sandbox Marketplace. The Creator Fund only accepts a small number of asset creators. On the Voxel Editor, only these creators are permitted to produce assets. However, creators must first upload their works to the InterPlanetary File System before selling them (IPFS). The creators of the accepted assets can finally sell their creations for SAND.

A digital plot of land in Sandbox’s metaverse is called Sandbox LAND. Players cannot publish their gameplay on Sandbox Game Maker without LAND. Each LAND has a distinct NFT that adheres to ERC-721 guidelines. These LANDS can be combined by players to create ESTATES.

On the Sandbox website, there are official public LAND sales that players can participate in. There are 166,464 LANDs available for purchase in total, and these will be distributed among several open sales. Players can find the announcements for these sales on Sandbox’s Twitter, Telegram, and Discord channels.

Also Read: SHIBA Inu Metaverse: How do I get metaverse Shiba Inu?

The Sandbox ecosystem’s native token is the SAND token. In the Sandbox metaverse, it serves as the main ERC-20 token. It gives users the ability to create, play, own, rule over, trade, and profit. A medium of exchange can also be used with the SAND token. Players can gather SAND and use it to buy items, play games, or customize their avatars.

Creators can also use SAND to buy LAND and other assets. Additionally, you can purchase GEMs and upload ASSETS to the Marketplace using SAND tokens. Additionally, it is employed in governance. Staking on the platform allows users to earn Sandbox cryptocurrency coins. GEMs or CATALYSTS can also be obtained as rewards for staking SAND.

Also Read: My Neighbor Alice Vs Axie Infinity: Which Is Superior?

How to buy The Sandbox NFTs

Although the game hasn’t yet gone live, The Sandbox has been selling NFTs in anticipation of the eventual full launch for a few years now. The project occasionally holds LAND sales that allow potential participants and investors to buy on the primary market. Alternatively, you can search for LAND and other assets on secondary markets.

For instance, as of this writing, the top NFT marketplace OpenSea has more than 100,000 LAND parcels listed. In addition, you can buy additional NFT game assets like avatars and items for use in the game. For instance, Snoop Dogg has made money off of a line of 3D NFT avatars made in his image that is currently offered on OpenSea and other online stores.

Here are the top 10 recent Sandbox-based Metaverse projects that have received attention.

What’s so special about the Sandbox?

It offers game developers the chance to create and share their works with a community of players. It presents a potential opportunity for financial gain for LAND owners as well. Additionally, it gives supporters of NFTs and the Web3 community a shared space where they can engage with others who share their interests and learn more about the culture.

Also Read: What Is Gameta: How To Play Web3 Games On Gameta?

Is The Sandbox a Good Long-Term Investment?

If SAND fits into a user’s investment strategy and risk tolerance, it could be a fantastic long-term investment. It currently plays a significant role in the metaverse ecosystem, and this situation is not likely to change anytime soon.

The Sandbox already makes extensive use of SAND. It serves as the game’s primary medium of exchange and the cornerstone of all interactions and transactions. Users must first gather some SAND before making any cosmetic purchases to adorn their metaverse land plots. Sand is another tool used to pay for in-game activities. A player might construct a minigame or roller coaster on their property and charge other players to use it.

In the future, SAND will serve as a governance token. An autonomous decentralized organization will soon be implemented in The Sandbox (DAO). Voting on significant proposals affecting The Sandbox’s future will be available to owners of SAND, land plots, and character avatars.

Does The Sandbox Have a Future?

With the influx of large corporations and individuals who recognize the potential of creating communities in the virtual world, the metaverse mania may very well continue into the future. Employers report that workers of all ages are completely reimagining their careers and looking for new opportunities that allow them to work from home. Perhaps what makes these opportunities possible is the metaverse.

The Sandbox’s worth and reputation have grown across many industries as a result of a clear focus on partnerships with top brands. This innovative platform has been able to stand out from the competition thanks to clever collaborations with well-known figures.

The Sandbox has succeeded in establishing itself as a metaverse that houses some of the biggest brands. Its stated objective is to make the platform available on mobile devices by the end of 2022. The Sandbox should have a bright future as it makes investments in the development of in-game employment opportunities, keeps monetizing the assets, and adds features.

A player can create assets and gaming experiences in the metaverse game Sandbox and then sell them on the game’s market to make money. On LANDS that are up for sale in a public LAND sale, the gaming experiences are housed. Additionally, the game’s avatars can be designed and customized by players. As the platform’s native token, SAND is used. Players can purchase games, LANDs, GEMs, and other items with the token as a medium of exchange. It can also be used to stake coins on the platform and receive rewards.

Disclaimer: This is not investment advice. Please do your due diligence before investing in any asset.

Also Read: My Neighbor Alice: An Introduction To The Play-To-Earn Crypto Game